More progress on my task & getting close to the finish line

June 21, 2020
Hello! I was not as close to finish as I had estimated before. However, I have some more good progress on my task!

Right after my blog the previous week, I found the problem which was making me very concerned about my code. Whenever I ran ScummVM, it took about 20-30 seconds to start. I was worried that some of my code could be troublesome, but then I found out my configuration file was a little too big.

The configuration file (scummvm.ini) stores some useful information and is often low in size (~10KB) or so. In code, we interact with this file using "ConfMan". For my previous task, I configured this to get a boolean from the .ini file to force the RTL-based GUI.

I think some of my temporary code would have caused this issue. The ini file was around 150MB big!

I was curious to see what it contained, so I opened it in sublime. It took ~15 minutes to open and it had this: 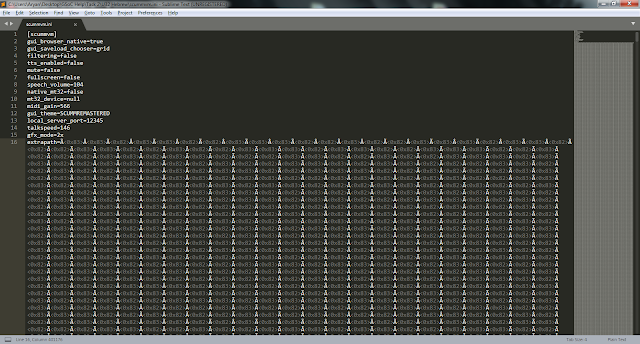 15 minutes! For my own amusement, I have saved this file in another location. I simply deleted the file and relaunched scummvm, and I was so happy when it was running smoothly! I was genuinely thinking I made a big mistake somewhere or my code is very poor. Phew!

Apart from this little incident, this week I also enabled all engines in my project. Previously I had only enabled one to speed up compile times on my potato pc.

The compilation times really took a lot. A lot of time. There were ~350 errors after the first time I enabled all (stable) engines. I solved all of them, and the project was now fully compilable!

I also had to add in support for my own version of printf, which took in U32Strings. To be honest, the existing code was really confusing to me, because I hadn't really dealt with language-feature level code before. My mentor pointed out a good StackOverflow answer, which helped a bit to understand but I was still confused.

After getting nowhere on it for an hour or so, I thought I would just write a temporary code to get started. I passed in the code as U32String and used iterators to loop through and check for "%", then switch according to characters. I did this only for 1 argument because I wasn't really sure how to do it for a variable number of arguments.

Following along slowly side-by-side with the answer from StackOverflow and the existing code of ScummVM, I was able to do it!

So, what's next? To adapt my code across the project, I am now nearly modifying ~210 files when compared to the master. This means that I have to be more careful of my code effects, and more testing. Even though I plan to open the PR soon, I am thinking it will be a few more days to test out everything and make sure there is no funny business (like the 150MB ini file!)

That's it for this week's progress! I have one more thing to say, though. My previous task - "RTL GUI" is near merge now. My mentors have told me that now is a good time to look back and reflect on my task because I have achieved the first milestone. It's a great idea, and I will be writing a new post regarding this, and it will be going up shortly after this post!

May 06, 2020
Hello World  GSoC! A start of a wonderful journey, and I'm a part of it! I'm pleased to announce that my proposal has been accepted to GSoC 2020!  From coding "Hello World", to making small projects, to being a part of ScummVM's GSoC student is fascinating. You know, honestly speaking, I didn't think I would make it. I started my GSoC proposal late, around 19th March. I sent in the first mail to my potential mentor then - and crafting a great proposal usually takes many days. Regardless of the proximity to the deadline, I worked as hard as I could to make a decent proposal, and on 4th May - that hard-work reflected an essential part of my life! This is my first ever professional experience, and things look a little scary but I have fantastic mentors. Eugene " sev " Sandulenko - the current project lead of ScummVM & John " DJWillis " Willis - team member of ScummVM since 2006. In fact, they're so qualified that it'
Post a Comment
Read more

The (official) end of an amazing journey!

August 25, 2020
Hello! GSoC has officially ended, and I'm in the final stage - submitting my work for the entire summer to Google! When I first received the acceptance letter in May, I was very much baffled. It was exciting and a bit scary at the same time, because I have never ever worked on a project of this scale. Well, first time for everything I guess :) So, what have I been doing this past week? Last week I left off saying my U32 PR was showing some activity, and this week, @criezy helped out a lot by reviewing my U32 PR, and providing much feedback. He also helped out pretty much entirely towards the MacOS/iOS platforms, because it was quite not an area (Objective-C) I was comfortable in. It was really a huge help. Apart from that, I mostly spent the entire week looking at the PR to see what could be changed, fixing my mistakes, and making the PR ready for merge. It has improved quite a lot!  Criezy pushed an update for iOS, which led me to believe that there might be many more missing are
Post a Comment
Read more

May 13, 2020
Hello, it's nice to talk to you again!   This is my first week after being accepted into ScummVM and I have a lot to talk about, so let's get started. A little sidenote - Originally, I thought to update my blog once every two weeks and that it would be a good idea, but I just really wanted to update you guys with my exciting first week!  I was reading my fellow GSoC student's introductory blog post when I realized that the introductory blog post is also meant to introduce a person, something I completely forgot in my first post. Yes, that's right, I forgot to introduce myself - in my introductory blog post. You read that right - but I hope that you didn't find it rude, I was just really excited to be a part of ScummVM for this summer, and somehow forgot what I was supposed to write! Let's do it right this time before we move on to my first week's experience! Introduction Hiya! I am Aryan Rawlani, a Computer Science student in Ahmedabad, India
Post a Comment
Read more